Days One and Two

My journey east began with a flight to the west. The flight to Chicago was unfortunately scheduled at the same time as game two of the playoffs; the Indians vs. the Yankees. As a Cleveland native, I am of course an Indians fan. When we took off, the boys had managed to tie up the game. I was greeted in Chicago with the news that we had won in extra innings! GO TRIBE! My flight was fairly uneventful with just a bit of turbulence. When booking the flights for this adventure, I decided to splurge and selected first class seats for this leg of the trip! I had never flown first class before and thought it would be worth the extra miles on an international flight. The first class seats on the tiny commuter plane to Chicago ended up being roughly the same size as the usual seats I am used to! The flight to Heathrow, however, was an entirely different story!

Once I boarded the plane heading to London, I was greeted by name and offered sparkling water or champagne. I quickly settled into my seat and attempted to familiarize myself with all of the gadgets. Shortly after takeoff, I decided to watch a movie while I waited for my dinner. I selected Gifted. My meal arrived a few minutes into the movie. I feasted on a kalette and saffron orzo salad, a grilled herbed chicken with tomato quinoa rice, haricots verts, tikka masala sauce, and an assorted gourmet cheese plate for dessert. With a full belly, I figured out how to recline my chair and attempted to get some sleep. With a chair that fully reclines into a bed accompanied with a full-size pillow and blanket, you would think sleep would come easy. It did not. Any light or noise can keep me awake. I did, however, manage to get a restless three hours of sleep! I think that is the longest I have ever slept on a plane! As soon as the cabin lights were turned back on, there was no more sleeping for me. I was offered a breakfast of assorted fruit and a biscuit, and an hour later found myself on British soil.

I had been to Heathrow once before (back in 2007), but I didn’t realize how massive it is. I made my way from terminal 3 to terminal 5. This included a long walk, a 9-minute bus ride, and a trip through security. I have to say it is probably the best smelling airport I have been too! Seriously, I think they pump something into the air!

Knowing that I would have a long layover, I pre-booked a spot at the Aspire lounge. I have to say I was a bit disappointed. The lounge was extremely busy, and finding a spot to sit was a challenge. One of the reasons I selected this lounge was for the Bliss spa. Sadly, the spa was closed. Having another six hours to kill and feeling a bit rundown, I decided to shell out the £20 for a shower. It felt amazing! Plus, the shower was stocked with Bliss products. Yay! I think if I ever ended up here again with a long layover, I would skip paying for the lounge. You do not have to pay for the lounge to utilize the showers or spa. Another downside is that you only get to stay in the lounge for 3 hours.

After my 3 hours were finished, I did a few laps around the terminal. The vibe here is more like being at a shopping mall than an airport. A high-end shopping mall! I managed to find a secluded corner with a view of the runway while I patiently waited to find out which gate my plane would be at. From what I can gather, they wait to announce the gate location until approximately 20 minutes before boarding begins.

Boarding for the flight to Venice was quick and we were able to leave a few minutes ahead of schedule. The seating on this plane consisted of three standard seats on either side of the center aisle. For the first class section, they left the middle seat empty to give us a little extra room. Dinner was served promptly after takeoff; breaded chicken with a potato salad and a custard for dessert. I finished it off with a cuppa tea. We landed early and I was through immigration in no time. I grabbed a taxi and arrived at my home for the night in no time.

Buona notte Venice! I cannot wait to meet you properly in the morning! 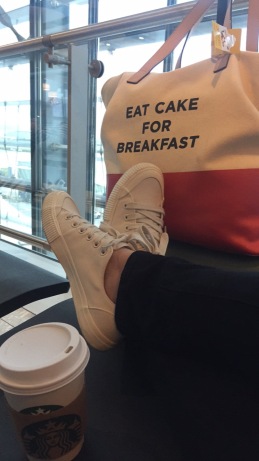